The original “purse dog!”  Long before Paris Hilton was stuffing Chihuahuas into her handbag, Jack Russell Terriers were being toted around in “terrier bags” while their owners traveled around on horseback.  Originally bred in England, the Jack Russell evolved to its current form in Australia.  This faithful outdoorsy breed was first recognized by the AKC in the early 19th century and is currently the 72nd most popular breed according to AKC registration records. 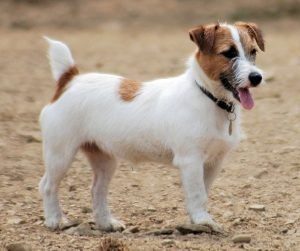 Coat & Color: Tri-color, white with black, or tan.  Their coats can be smooth, wire, or a mix of both (smooth heads with wire bodies)

Other: Famous Jack Russells include the title character on Wishbone, Milo in The Mask with Jim Carrey, and Eddie on the television show Frasier.

Highly intelligent, these dogs can often be described as “tricky.”  They’re definitely not to be trusted with small animals (their hunting instincts run very deep and very strong) and they’re prone to pull off Houdini-worthy escapes!  They have a penchant for digging and love to explore.  These dogs are very intense.  Fortunately, they’re as intense with their wonderful qualities as they are with their troublesome ones.  With the right owner, Jack Russells can be loyal, affectionate, playful family pets.

Special thanks to Dog Mountain for use of this featured image of the Jack Russell Terrier.