While Chihuahuas don’t actually have Mexican accents like they do in the movies and on television, they do originate from Mexico. Chihuahua, Mexico, to be specific (go figure?). Recognized by the AKC in 1904, Chihuahuas are estimated to be the oldest—and smallest!—breed to originate in the Americas. 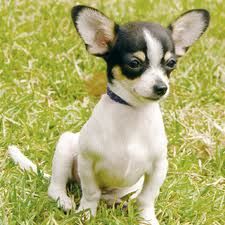 The Chihuahua is now the 11th most popular dog in the United States according to AKC registration records.

Size & Weight: The Chihuahua is a Toy breed. An actual “show” Chihuahua is not to exceed six (6) pounds in weight, but pet Chihuahuas can get up to 10-12 pounds and still be considered “healthy.”

Most have short coats, but some have longer coats that are “flat” or “curly” in texture. Chihuahuas are generally made up of solid colors, or marked and spotted with color on a white background.

Other: We all know that Chihuahuas are small, but Chihuahuas are also typically known for their apple-shaped heads. They’re also very swift and graceful with their movements.

There’s one thing that all the commercials, television programs, movies, and cartoons seem to get exactly right: Chihuahuas have attitude.

Chihuahuas tend to have very high self-esteem and are quite often filled with a sense of self-importance that’s a force to be reckoned with! (If you’re familiar with the term “Napoleon Complex,” then you know exactly what I’m talking about—shorties with attitude!). They’re actually quite similar to many smaller terrier breeds in temperament.

• Chihuahuas are perfect for an urban environment

• Longer lifespan that most dogs

• With their small size, Chihuahuas are the perfect prey for coyotes and other predators. (In my research, I even read of a few cases in which someone’s pet Chihuahua was taken away by an owl!)

• They aren’t the best dog for first-time dog owners. With their bossy attitudes, Chihuahuas require a moderate to high amount of training.

Chihuahuas are fragile. They can live a long time, but it can be tough getting them there! Chihuahuas have bones that break extremely easily and can suffer from eye problems, heart disease,

If you are considering adding a Chihuahua to your family, please visit Chihuahua Rescue for adorable, adoptable dogs.