What is a no-kill community?  It is a community that has pledged to stop routinely killing healthy dogs and cats who come into the county animal control shelter.  In Manatee County, we routinely killed around 55% of all dogs and cats that come in to Animal Services.  Why?  We didn’t know what else to do with them.  Is Manatee County worse than any other county?  No indeed.  Our statistics are typical of local government-run facilities all over Florida and indeed, all around the country.

So what has changed?  First and foremost an animal lover, Commissioner Carol Whitmore, became the liaison from the County Commission to Animal Services.  Combine this fact with the fact Animal Services is under the purview of the Director of Public Safety, Bill Hutchison—another animal lover.  And finally, in May the Chief and Assistant Chief of Animal Services Kris Weiskopf and Joel Richmond went, along with three animal advocates, to Houston Texas.  There we all spent a full day in class with Nathan Winograd, the author of “Redemption” and the founder of the no-kill paradigm.

In Houston we learned that communities can indeed become no-kill, we learned the no-kill equation, and we realized that a number of communities had already been successful at becoming no-kill.  I think Houston was the turn-around point.  The commitment to no-kill had begun.

In September 2011, 219 dogs and 215 cats were impounded in this county.   By the end of the month, 80 dogs and 116 cats were killed.  In total, 45% of the animals that came in were killed.  Note that I am purposely using the word “killed” instead of “euthanized.”  We used to say that our stray dogs and cats were euthanized.  The dictionary definition of euthanasia is “the act of putting to death painlessly or allowing to die, a person or animal suffering from an incurable, especially a painful, disease or condition.”  We have been killing healthy dogs and cats.

The goal is that by December 2012 ninety% of the animals that come in will be released alive either back to their owners, to rescue groups, or by direct adoptions.  It is a huge, ambitious goal.  It will take the efforts not just of Animal Services but also of the rescue groups, trainers, photographers, many volunteers, and, indeed, the entire community. 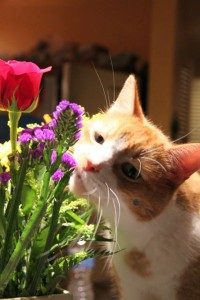 Join with the community to make this happen.