Rhodesian Ridgebacks come from South Africa (from Rhodesia, now known as Zimbabwe).  Originally bred by Boer farmers as a hunting dog, big game hunters in the late 1800s found them especially useful as a companion while hunting down lions while on horseback.  Rhodesian Ridgebacks were eventually introduced to the United States in the early 1950s and became officially recognized by the AKC in 1955. 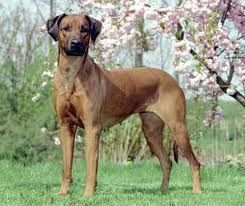 Coat & Color: The most noticeable thing about the Rhodesian Ridgeback’s coat is its trademark “ridge” along the spine.  Other than that, the coat is short and sleek.  Their colors are light or dark red wheaten, with or without white markings on their chest and feet.

Other: Somewhat flat skull and wide-set eyes.  They’re often described as having an “intelligent” look to their facial features. 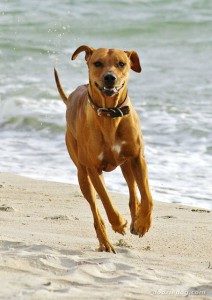 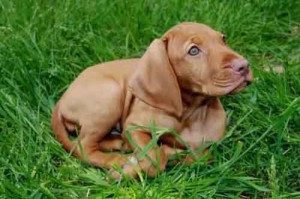 Rhodesian Ridgebacks were originally bred to be fierce hunters and they have managed to retain many of those traits even now!  Strong-willed and extremely independent, Rhodesian Ridgebacks are loyal and protective of their masters but can be aggressive with strangers and other dogs.

These dogs are very energetic and intelligent and require near constant physical and mental stimulation to be happy.  They can become destructive when bored or under-exercised.