Originally used for dog fighting, the Boxer would stand on its hind legs, striking out at its opponent with its front paws like, well, a boxer!  Officially recognized as a breed in 1904, the Boxer is currently the 7th most popular breed in the United States.  Many celebrities have taken a liking to Boxers over the years, including Humphrey Bogart and Justin Timberlake. 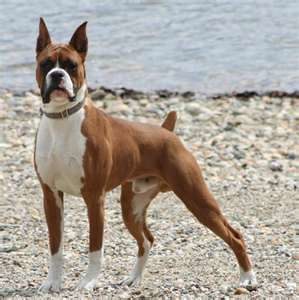 Size & Weight:  On the larger end of “medium.”  Boxers typically measure 20-25 inches at the shoulder (with the females being on the smaller end of the scale) and weigh around 50-70 pounds.  They’re very muscular.

Coat & Color:  Smooth, coarse, short hair in either fawn/red or brindle coloring.  They can also come with a black mask and/or white markings. 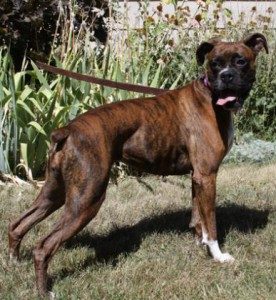 Other:  “White” Boxers are fairly common.  However, they are actually considered to be a “fawn” or “brindle” dog with overly excessive white markings rather than a truly “white” dog.

The top five character traits of a Boxer?  Alert, loyal, curious, brave, and very playful.  Boxers are equally at home in the role of a watchdog or bouncing around out back with the kids.  However, this breed can also be trouble if the owner isn’t confident enough to handle it.  This is a dog who likes to know who’s boss—and may challenge you for the title!  But, with the right amount of training and love, you could end up with a wonderful pet you won’t soon forget.

If you are looking for a Boxer in your area, please check your local shelters or visit Florida Boxer Rescue.